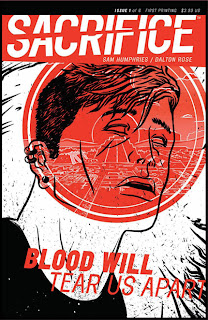 Hey folks! Just a few quick notes about Sam Humphries’ and Dalton Rose’s SACRIFICE, a new six issue comic series that is not being solicited through Diamond Comic Distributors:

1) It’s a full-colour, self-published mini-series from the writer of OUR LOVE IS REAL, which was a lot of fun. We’re expecting this to be great too.
2) We will be on of the few stores carrying this book!
3) We had a choice between getting the issues quick, and paying more for shipping than it would cost to buy the books, or getting the book slow, and being able to sell the issues for cover price. We chose “slow” and “cheap”, so it may be up to 3 weeks after the book is ‘officially’ released before we get our copies. Sorry!

Regardless, we’re quite happy to support this effort and we think it’s going to mean some good comics. Find out more about the series at http://samhumphries.com/sacrifice-comic-book/.